Have you ever wondered what would happen if you had a million dollars? What about a billion? Maybe a trillion? Well, let me tell you the story of how I acquired an unlimited amount of money and what happened afterwards.

It all started on the dawn of my 40th birthday. That year had been the worst year of my life. My parents had both died, my wife was diagnosed with cancer, and my two children had disowned me. All of my time and money was spent on helping my wife, funding her doctor bills, and spending her possible last moments with her.

That morning, I didn’t mention my birthday to my wife as I brought her breakfast at the hospital. “How are you?” I said instead.

“Alright.” Her face said it all…she was worse. “Happy Birthday. I didn’t get you anything.”

My heart broke for her. She had been through so much. The kids, Rebecca and Liam, had left and broke her heart giving us no word. Her husband was nearly bankrupt. She was dying! Yet all she had to say was “happy birthday” feeling bad she hadn’t gotten me a present.

“If you could have anything in the world, what would it be?” She was now asking me, eyes nearly hollow, though a sweet light still shone.

“Easy. For you to be better!” I answered and meant every word.

“Are you sure?” She asked. “Remember when we were young and all we wanted was to change the world?”

It hurt to hear her call us old in a way, she was 35! “There’s nothing that could make my world better than to see you heal.”

“Listen.” She turned serious. “You need to stay true to who you are. Don’t be selfish. Keep trying to change the world, keep moving on, keep-“

If she hadn’t coughed, I would have interrupted her suggestion that I’d have to move on from anything. From her.

Hearing her, the nurse came in shortly and asked me to leave in order for my wife to rest. As was custom, I left the room with nowhere to go. I’d taken off work yet again to be with her. Seeing her doctor down the hall, I ran to him, footsteps echoing throughout the hallway. “Dr. Deimon, I’ve been meaning to talk to you. Any word on the new study?”

“Hello,” he smiled at me and I wanted nothing more than to slap it away. “I’m sorry. These things take time. Time and a lot of money. Money even I do not have. Besides, the outcome is still inconclusive.”

“And cancer isn’t?” I was irritated, leaving in a fury. I needed air. Running outside, I leaned by back up against the cold building, not caring that it had started raining lightly.

“Sir,” a woman’s voice startled me. I looked over to see a young homeless next to me. Normally, I would have observed her, but I didn’t have it in me. “Would it be too much to ask to lend me a few dollars? I haven’t eaten in a few days.”

For a moment, I contemplated my decision. To be honest, I didn’t have a few dollars to spare. I started to tell her so when my wife’s voice invaded my thoughts. Change the world. But I don’t have the money! I would argue. Have you eaten today? The voice of reason argued back. “Fine, you win.”

“Excuse me?” The woman asked.

“Nothing.”  I shook my head and handed her ten bucks.

“Sir,” she spoke again, and I almost told her I didn’t have anything else when she continued on. “If you could have one wish…what would it be?” 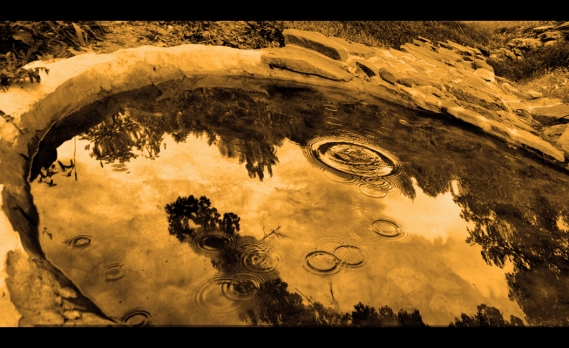 As if to punctuate her sentence, a clap of thunder boomed throughout the sky. On instinct, I nearly answered the same answer that I’d given my wife. But, remembering her warning, I thought for a moment. How could I heal my wife and still stay true to who my wife thought I was? “An end to sickness.” I decided.

“Are you sure?” She questioned.

“What do you mean?” I sighed, not enjoying the game.

I contemplated that. “I don’t know what to say.”

For the first time, I really looked at her. Behind her mussed hair and dirty face, she was a rather pretty young woman. No older than twenty. “Food…or money.”

“What does your wife need?”

“A cure…or…maybe money.” I scoffed, before going on alert. “Hey, I never said anything about my wife!”

“So what is your wish?” The woman asked again, unmoved.

“My-?” I was puzzled, though something about her urged me to answer. “I guess unlimited funds would solve everything in a despicable world run by greed.”

“Very well.” She nodded her head in confirmation and spun around. I watched her ratted form retreat as I slipped my hands in my pocket. That’s when I noticed a paper that hadn’t been there before. When I pulled it out, I noticed it was a business card that read, “My Personal Bank.”

Feeling curious, I called the number. “Hello, sir, would you like to make a transfer?” the voice answered.

“You called me, sir.” The man said matter-of-factly. “Would you like make a transfer?”

“Is that my only option?” I asked.

“Well…yes, sir, withdraws are not allowed and deposits are futile.”

This puzzled me greatly, but I took the bait. “I’ll make a transfer to my bank account. But…I’m not giving you my number, I’m not an idiot!”

How could he transfer without my number? Without any info? “Uh…what’s my limit?”

The man laughed, showing the first sign of emotion. “Oh, sir, are you sure you have the right number? A limit?”

By now I was sure this was a practical joke, so I told him to make it a million dollars.

“Okay, sir. There will be a waiting process…” He started. Here’s the catch. He was going to ask me to hand over a deposit of some sort. “…of 30 seconds.”

Afraid for no apparent reason, I clicked end on my phone as the man said “thank you.”

Shaking it off, I went upstairs to see how my wife was doing. When I did, she was nearly frantic as she spoke on her cell as she now sat up in bed. “What? Oh…yes, he’s here…I’ll call you back.”

“Tell me you didn’t mug someone!” She accused.

I didn’t speak, only tore my eyes from my wife’s frail form that was lit up by the light from the hospital window.

“Someone just deposited a million dollars into our account…” Tears were in her eyes by now. “I-I don’t understand.”

I didn’t tell my wife of the encounter as I hadn’t quite figured it out, all I knew was that, unless something had gone horribly wrong…we were rich.

This is Part I of the story. Check back next week for Part II.

Emily Medlock is a freelance writer who enjoys gaming, anime, and other nerdy stuff! When she's not stirring controversy with her overwhelming beliefs, she can be found avoiding conflict in a book, game or movie. View all posts by xJGirlx - Emily Medlock

Want to Improve Yourself or Your Relationship?

Hire Emily Medlock TODAY to achieve any goal you set!

Emily Medlock is a Life Coach who is available for hire from anywhere in the world!